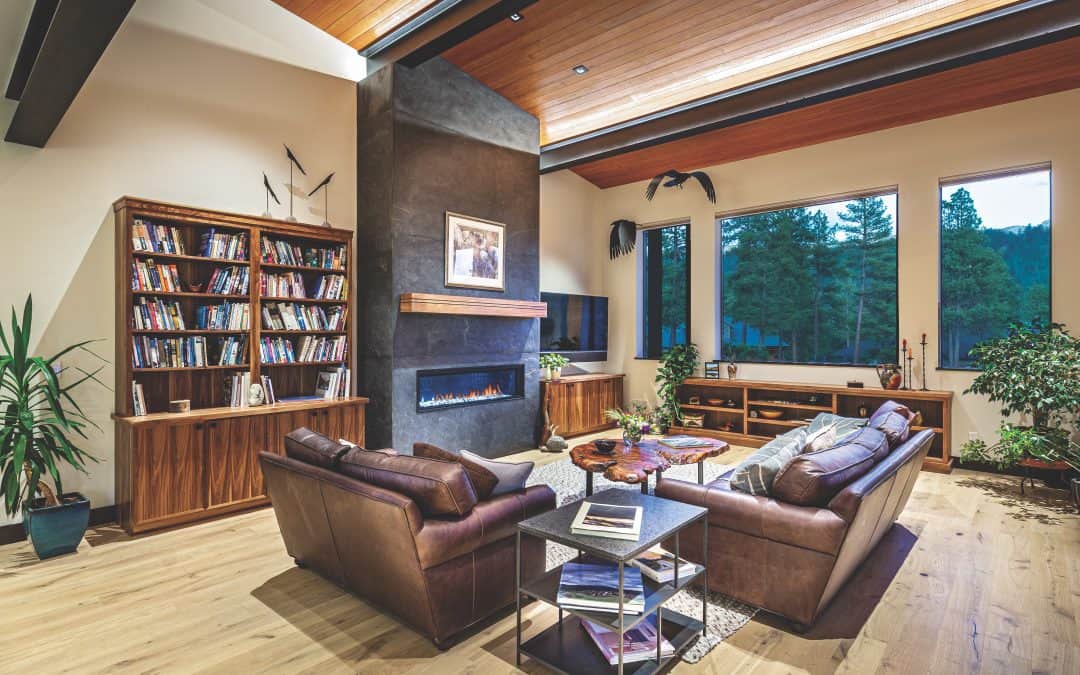 Upon arrival, the first thing you notice might be the beautiful Douglas-fir siding. As you walk into the home and soak in its attractive contemporary design you see large panes of glass that let in the surroundings. Among many noticeable features are the beautiful high ceilings with exposed beams. The cumulative effect gives the home an aesthetic similar to that of the homes in the Lake Tahoe area, where Greg and Tara Mantell-Hecathorn are originally from.

Despite all of this, the thing that really sticks with you after visiting their home is how open it feels. It would be fair to say that it’s hard to tell where the foyer, living room, kitchen, and dining areas begin and where they end. They are all part of the same large communal space, and the mind immediately envisions large family gatherings, filled with laughter and warmth. As it turns out, the vision is appropriate, since that’s how Greg and Tara live their lives and run their business, Mantell-Hecathorn Builders.

Greg and Tara began practicing their craft as custom home builders 45 years ago, when they lived in the Alaskan bush and built homes in Fairbanks. Life took them back to their native California for a time, and finally to Durango. They quickly became one of the area’s most renowned builders, specializing in energy-efficient homes. As master certified green professionals, they have perfected the practice of building dream homes for others. They have become so good at it that they built their own home in the same ultra-efficient manner that’s earned them their reputation.

That house was named the Grand Winner of the U.S. Department of Energy’s 2020 Housing Innovation Awards for a custom home. That means the house meets and exceeds the highest standards for energy efficiency in the housing industry. In addition to energy-efficient appliances, building specifications were designed to keep the interior of the home at the occupant’s desired temperature without wasting heat or air conditioning.

A critical part of earning the DOE ZerH certification is meeting the certification standards of the U.S. EPA Indoor airPlus program for healthy indoor air quality. That means the construction features rarities like triple-pane windows and 9-inch-thick double-studded walls, giving them an R-factor of 42. The airtightness of the home is certified at a Home Energy Rating System Index of 14. In a normal home, that metric averages somewhere between 90 and 100, meaning the Mantell-Hecathorn residence is somewhere between 80 and 86 percent more efficient than the average home.

Since it was built for the owners of the company, it would be reasonable to imagine that these features are exclusive to the Mantell-Hecathorn’s home, but the company has found its niche in the Durango market by building custom high-performance homes just like this for its clients, and every one of their projects meets the standards for the Zero Energy Ready home program.

You could be forgiven for assuming that a home with so many exact features would take years to build, but you would be wrong. Despite the high level of customization, the 3,300-square-foot home took just six months to construct. The efficiency with which they complete their projects parallels the efficiency of what Mantell-Hecathorn Builders constructs around Durango.

It makes sense that, in addition to efficiency, their house is also designed to host loved ones. Mantell-Hecathorn Builders is a family-oriented company, as Greg and Tara’s son, Hunter, is president of the company and on the jobsite of every project every day. Hunter’s wife, Miranda, oversees all aspects of business administration.

The company only takes on about four projects a year, and they have their craft down to a science. “We have an A-level group of subcontractors, and they have had experience working together,” says Hunter. “They know how to stick not just to the schedule of the project but the quality standards that we build our homes with.”
Hunter calls it “stacking the dominoes tight,” and his promptness is a product of not just experience but also Mantell-Hecathorn’s desire to give every client they work with the absolute highest level of satisfaction. They take each project start to finish, and many of their projects start when the customer first begins thinking about building their dream home. “The client will say they’re interested in building, and they’ve started looking at land,” Hunter says. “Usually the first time we meet them will be walking a property they’re thinking about buying to build on. When you start from that place you can get a true idea of what the client really wants and help make their vision into reality.”

This is what helps the team at Mantell-Hecathorn break a stereotype that most contractors fall under: being over budget. “We are able to direct our client toward decisions that reflect their desires. Since we have done this so many times, we can make open and honest budgets for our customers. Our homes are always on budget if not under, and there are no surprises. The only way something changes in the budget is if it’s from a client-driven order.”

The company’s customers often become friends of the Mantell-Hecathorn family, and with that perspective in mind it is easy to understand why the firm works so hard to make sure projects stay on schedule and on budget for their clients.

Family and friends mean everything to the Mantell-Hecathorn clan, and that’s evident everywhere you look. In the backyard, a playhouse sits in the shadow of the home. It was partially designed by Hunter’s daughter, the granddaughter of Greg and Tara. The playhouse features the same beautiful Douglas-fir siding the home has and includes real windows as well. And the reclaimed redwood siding in the powder room comes from Tara’s family home in California. Before making its way into her parents’ home, it came from the company her father owned.

Though the dwellings they live in and build may be a long way from the Alaskan bush, the values of working hard and taking care of people have remained constant. That journey is best summed up by how Greg personally views the family’s story. From building our cabin in the Alaskan wilderness 45 years ago to winning national awards, we have worked hard and have been rewarded with beautiful homes and friends.”

Proud GOLD sponsors of Parade of Homes! It starts

Repost from @reynolds_ash_and_associates • We ar

Repost from @fortlewiscollege • We’re taking a

THANK YOU FOR THE TAG @warpony.wilderness • Red

Repost from @crows.closet • Made for biking… a

Thank you for the tag.... Repost from @overendpho

Beautiful hike today! We didn't go for a swim but

Repost from @silvertonsingletrack • Are you keep

Repost from @staythetrail • As temps begin to fa

THANK YOU FOR SUPPORTING LOCAL! Repost from @color

Repost from @skipurg • Things are heating up thi