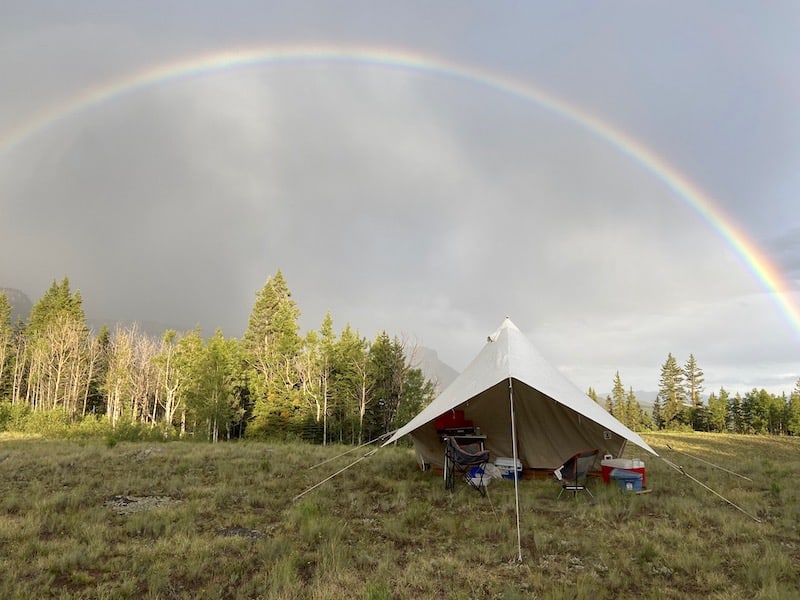 In Our Hurried World, Unique, Quality Work is Still Possible

Do quality and craftsmanship still matter in this fast-paced world? If they didn’t, then the four custom craftsmen below wouldn’t be in business. Meet a local knife-maker, upholsterer, woodworker, and tent-maker: 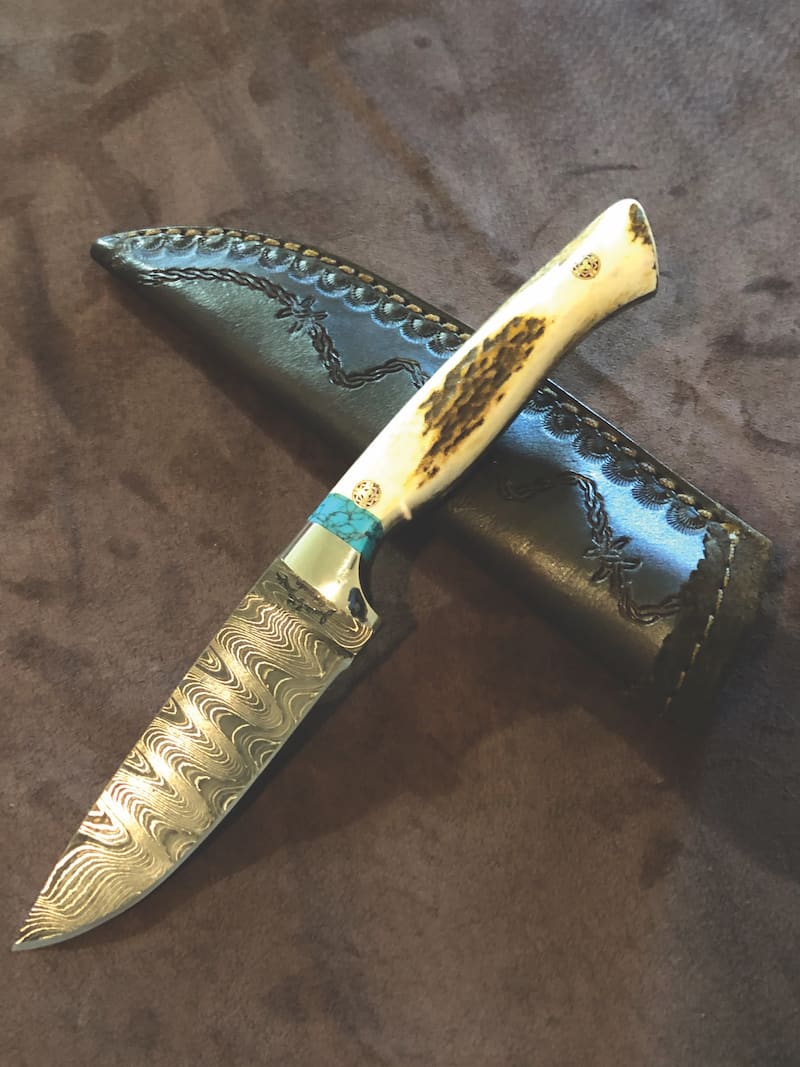 If you think one knife is just like any other, you haven’t seen a James Largent knife.
Using handles made of antlers and exotic woods, immaculately pieced together onto heat-treated blades, this Bayfield man crafts one-of-a-kind knives that outdoorsmen—and anyone with an eye for art—lust after.

The former full-time musician went to work for a knife maker in southwest La Plata County in the 1980s. In 1991 he started his own business. He traveled extensively to gun shows and flea markets, hawking his knives (and winning awards that are “sitting in a box somewhere”).
The craftsmanship is apparent, even to the untrained eye: The colors and grains, the intricate designs, the blade lines. What you can’t see is the process. Largent treats the antler and wood handles with a special amber that strengthens them and brings a shine. The blades begin as 1½-inch-wide bars of steel that Largent heat treats for strength in a furnace, the process taking most of a day. Pins and epoxy connect the blade and handle, and a metal “bolster” creates a transition between the two.
Largent is 70 and says, “I’ll go as long as I can,” but he’s set on having his son Jimmy take over eventually. Jimmy is a fishing and hunting guide who makes knives with his dad in the winter. “He’s got it down,” the father says.

Check out Largent’s knives on display and for sale at Gardenswartz Outdoors, 863 Main Avenue in Durango. 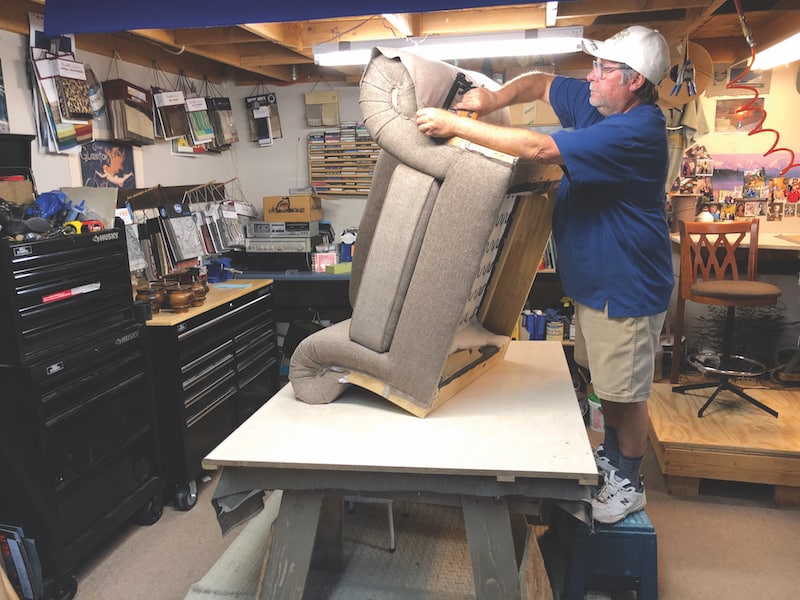 Maybe Kurt Gerlach had to break away from the family traditions before he could appreciate them. As a kid, he and his siblings served as “young grunts,” doing whatever labor was needed in his father’s upholstery business, which was started by his maternal grandfather in upstate New York. When Kurt left in 1981, he figured his days of measuring cloth and hammering tacks were history.

After he arrived in Durango that year, he didn’t want to leave. Kurt showed up at a local upholstery shop and had a job within an hour. His career path was set.
In 2001 he opened Ye Olde Shoppe, a custom upholstery business that he operates from a building next to his Durango home. His time-honored craftsmanship is renowned, and that reputation earns him work in some of the finer homes in Durango, Telluride, Santa Fe, and even New York City.

Like a tailor, he can design and fabricate a sofa based on the customer’s size and specific comfort level desired. He uses designer fabric and works extensively with European leathers. The traditional German eight-way hand-tied suspension system makes his work nearly indestructible.
Kurt is also a licensed real estate agent, but his true love is Ye Olde Shoppe and working with his hands. When a customer sits on a sofa and tells him a piece he has built is juuust right, he says: “That’s my joy.” 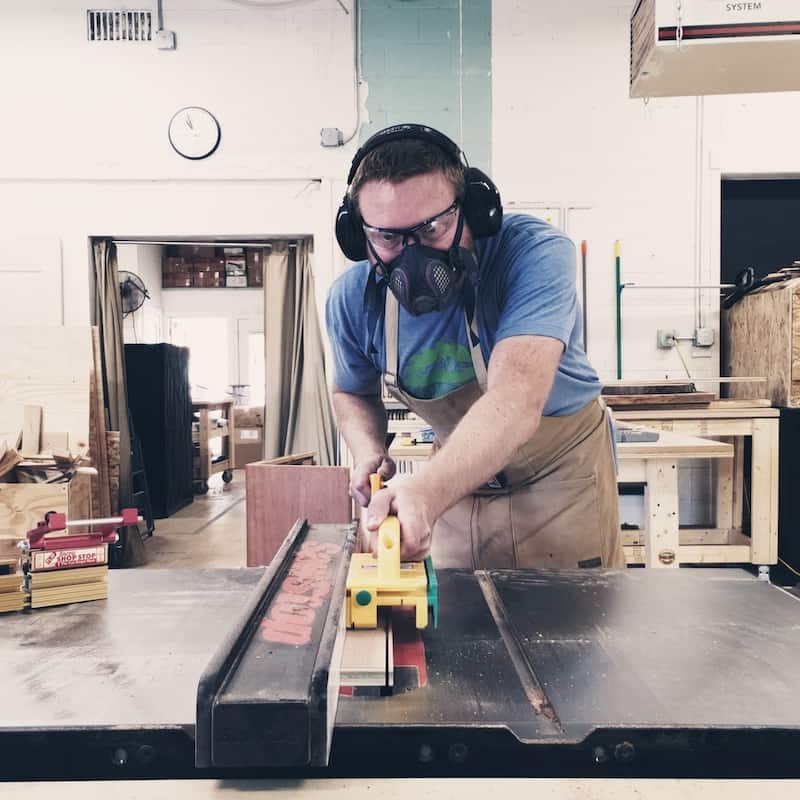 A visit to Noah Arvidson’s workshop, on North Main Avenue in Durango, reveals a very nice collection of wood—including cherry, oak, black locust, and, believe it or not, even the “invasive” Russian olive. If you doubt for a second that these flat milled slabs will soon become cherished home furnishings, just take a look at some of his finished products. Most are in homes, but you’ll find plenty of photos on his website.

Noah is a Chicago-area native who often visited Colorado as a youngster. He came here to finish college, achieving a biology degree from Fort Lewis College in 1998. The previous couple of decades, in Chicago’s corporate world, had not been so rewarding. He and his wife, Kate, were drawn here, and Noah opened Animas Craft Woodworks in June of 2019. He had previously started a woodworking business in Chicago as a side gig. 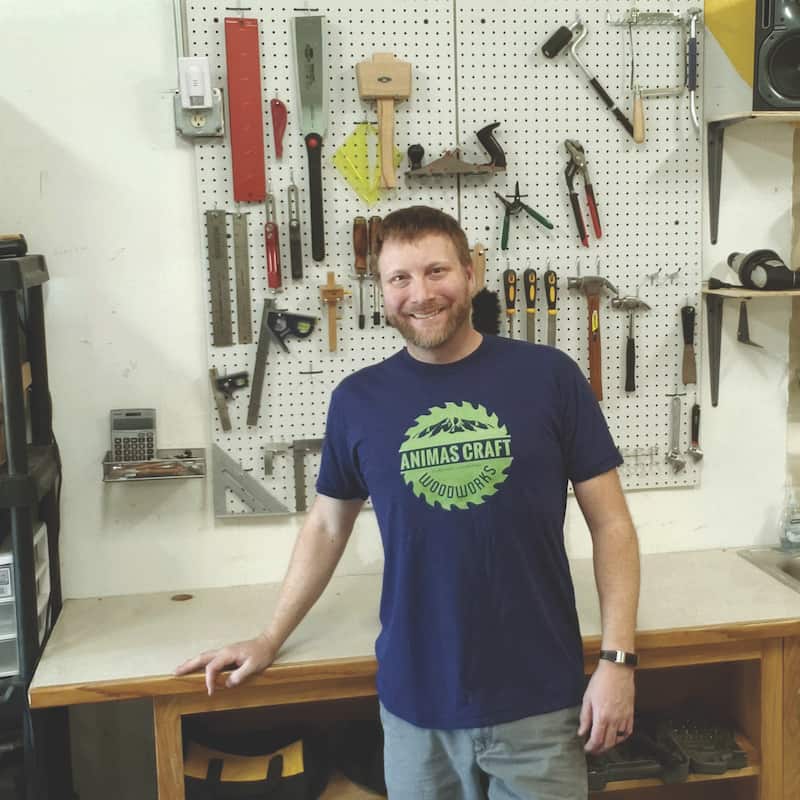 Some of his time is spent making connections—social media links, displaying knickknacks and talking to people at the Durango Farmers Market, and serving on a committee for the Durango Creative District.

“I couldn’t ask for a better community,” he says. “The amount of support is unbelievable.”

But more of his time is spent sawing and planing, chiseling and crafting precision joints—all the techniques needed to create heirloom-quality furniture and décor that people are proud to display in their homes.
“I love the work,” Arvidson says. “There’s something so rewarding about making stuff.” 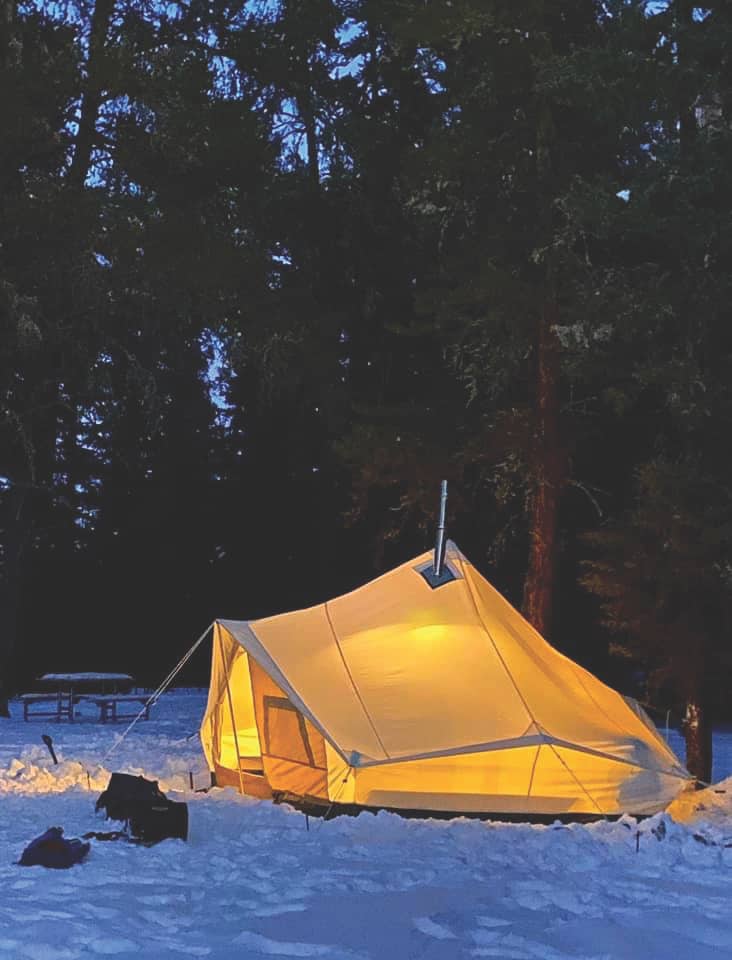 When Dave Ellis decided to start his own company making tents and bedrolls in 1992, he took his inspiration from the cowboy spirit, seeing how cattlemen in Texas and Arizona slept out on the prairie. Then he improved on that.

His Ellis Canvas Tents has grown, adapted, and innovated, always keeping the historical perspective: His Shackleton tent is modeled after one used by the famous Antarctic explorer, but he always makes sure his product is highly usable. He, his son Caleb, and a couple of helpers manufacture the products in Bodo Industrial Park, south of downtown Durango.

Cowboys and local hunting outfitters were Ellis’s first clientele. He attended ranch rodeos, went to livestock shows, saw what they were using, and brought them back a newer style of bedroll—lighter and smaller. He’s not someone who sits still.

“I’m an inventor,” he says, “and that’s probably part of my problem. I’m always upgrading.”

He has branched out plenty since those days, and his products are used by archaeologists, firefighters, and wilderness schools, among others.

The Shackleton “base camp” tent uses a strong but lightweight, seven-ounce, cotton Army Duck Canvas that is water and mildew resistant, and fire retardant. His Rocky Mountain Swag bedroll keeps you dry in a rainstorm and gives you room to move—“tent not required.”